The past season, 2016 and year was a period on which we built on the work done by previous committees and members.  A series of revised and new initiatives supported by members have, I believe, moved the club forward as place for members – new and old – to enjoy their club facilities and their sailing in Skerries.  This was only possible, as always, due to help of many people not least your committee members.

While Ross will speak in more detail about our season I should like to thank our Race Officers – Liam Dineen, Micheline Shiels and Helen Ryan for keeping our racing going each weekend.  Our thanks to Stephen Crowley for running of the punts and the great can do manner he exemplifies.  Special thanks to the many volunteers who manned the Safety and Mark laying RIBs during the season.  Without such levels of voluntary contribution, we could not run the level of club and event racing each season, we actually do!

In late 2015 following a review of operations and costs your committee decided that a revitalised membership drive was urgently required.  It was felt that given the improved economic conditions of recent years, our membership numbers particularly, at full membership, did not reflect that improvement.  A team was set up and Gerry Byrne was invited to lead.  Following a number of meetings in early 2016 and review of a survey of past and present members, Just Sailing was set up.  Based on previous good experience, on every Saturday morning of the 2016 sailing season new adult members were either brought out on the water, depending on weather, or given some instruction on various aspects of sailing.  All spearheaded by Gerry who was very ably assisted by Helen Ryan, who having traveled from Leixlip, provided not only her sailing expertise and support but much appreciated coffee and cake.  Our warmest thanks to both Gerry and Helen.

The impact was to increase new member intake from a net 14 in 2015 to c31 last year!  Over 20 of that new intake can be ascribed directly to this program!

Our thanks also to members who either loaned their boats or who acted as instructors – particularly to Neil Cramer, Cathal Sheridan, Coleman Grimes, Don Cromer, Liam O’Callaghan, Finn Kelleher, Garry Owens, and Bernie Grogan.

This program will be continued in 2017.  Already we are planning 4 introductions to sailing talks (in addition to regular talks) in the April timeframe.  Please see the newsletter for details.  They will be free.  Please invite anybody who you think could be possible candidates for membership.

We used the clubs’ boats (the Topazs, Omega and Wafarer) and member boats for this campaign.  We will expand using a donated Mermaid next season. We request continued support for this important program and if you are available on one or more Saturdays in the coming season please let us know.  Contact Gerry or myself or any committee member.

Neil will go through the accounts in detail.  But you will have seen that subscriptions rose by 6%, going, as previously stated, in the right direction.  A lot of hard work goes into the financial management of this club and our thanks to Neil Cranmer managing the multitude of operational fiscal matters including revenue in all forms, paying suppliers, wages, etc.  Thanks Neil.  Our thanks also to Siobhan Boylan who manages our membership records – a job that requires great detailed and persistent management.  Thanks Siobhan.  Our thanks also to Donal Lynam who managed the club well in the past year.

Initiatives on the Social front proved very popular.  In particular, increased use of the club on Fridays by the “Take Away Friday” evenings with reduced bar prices were very popular as were the Scones and Coffee on Sunday mornings, both of which have continued into the winter months.  Other events were:

Well done to Kathryn Collins, our Vice-Commodore, Paula McNamee, our Social Secretary, and Donal Lynam, our Club Manager, for organising these events.

Your continued support for these events in your club is appreciated.

Great work by Tom Adams and Stuart Burns supported by Sam Shiels and Robbie Keys has ensured that our boats were and will be ready for the upcoming season.  These guys quietly do a fantastic job!  We have about €150k worth of RIBs, Punts and Committee boat (the Inish Rua) in simple replacement value.  These volunteers maintain these assets for approximately €4k each year in parts.  3% of the replacement cost.  Our biggest danger is that they will be headhunted by Dublin Bus!  Thanks Guys

Since the end of the last sailing season we have had 6 talks covering the history of SSC, Neil Roach’s cruiser trip, the Ava Muller adventure, The club Barometer, Authers Dead story and last night the Monkeys Fist courtesy of Martin O’Tool.  We hope you enjoyed these events – we have 4 more before the start of the new season on such topics as the Irish Coast Guard, the last days of the Asgard II, Tall ships and safety on the water.  Our thanks to all the contributors.  Please continue to support these talks.

The newsletter, going out weekly and often more frequently, has firmly established itself as our primary means of communications due to the dedicated hard work of Camilla McLoughlin, our Hon Secretary.   Our thanks to her for her great work.  The SSC face page has likewise been re-energised by Gerry Byrne.  Please make sure that you have access to both these communications mediums.

A full and successful season was run by our ever active Junior section.  Highlights included

This was probably the one area we did not spend sufficient time on during the last season and which will be a priority for the coming year.  However, we did replace the front doors so our entrance is now more secure and looks a lot better – thanks to Paul Browne for assistance in this.  We also purchased and installed a new and more efficient dishwasher in the kitchen which will make for an easier clean up post events.  Our weather station is working well on the website thanks to Michael Johnson.  We have a number of action plans in terms of maintenance and decoration that we expect to advance in the coming season.

As ever our yard was well managed by our Yard Manager Gerry Boylan.  Nothing escapes this man.  The yard is as tidy as it has been in years,

We completed a successful season and are looking forward to an even more successful 2017.

With the new season just months away Ross Galbraith, our Hon Sailing Secretary, has issued a draft fixture list for the summer.  The final list will be agreed at the Boat Owners meeting in early March.  Please click on the pictures below – 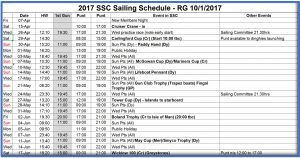 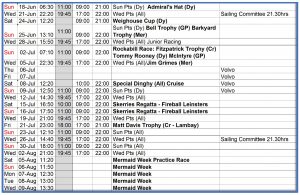 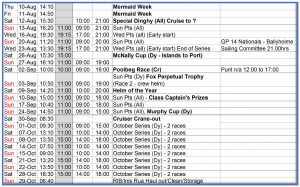 Email comments to Ross at ross.galbraith1@gmail.com.

Full Results of GP14 Nationals at SSC – click on below 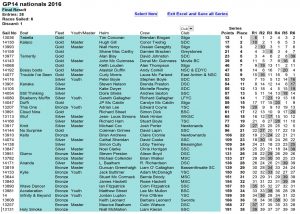 Skerries Sailing Club are pleased to host the 2016 GP14 IRISH & MASTERS CHAMPIONSHIP on August 27th, 28th and 29th of this year.  This event is sponsored by BACHARACH.  NOR, SIs, entry form, and Safety Plan are listed here:

SSC look forward to welcoming all GP14 sailors and friends to our club and wish them every success in their event.

The 83rd Annual Skerries Regatta took place over last weekend (July 23rd/24th) with over 37 dinghies and 10 cruisers competing. The weather was untypically friendly (except the last lap of the last race as Gerry Byrne discovered!) allowing all 4 dinghy races being completed in F2/3 but typically variable enough to provide challenging conditions. Liam Dineen and his team (Micheline and Helen) on Brian Lennon’s cruiser provided excellent courses for all.  The cruiser class completed the annual Howth to Skerries race for the Rockabill Cup which was won by Sean Davis.  Well done to our regatta fleet winners – Sam Shiels in Mermaids, Darragh Kelleher in Lasers, Stuart Burns in Class I and Fionnan O’Connor in the Optimists – full results below.   18 mermaids competed in the Regatta  – this was the fleet’s biggest turn out this season to date as they gear up for their championships in two weeks in Howth.  As always the regatta was supported by many many club volunteers who gave up time on the water to assist – in particular thanks to Ronnie Horan and Olive Parker as Safety officers and Grainne McGrotty in the Race office.  Good job by Donal Lynam in looking after the house and the BBQ function.  Many thanks to all the Rib drivers and assists and of course the sandwich makers who gave up their time. Our thanks to our sponsors – Blakes Cross and Paul Browne (and for organising the band on Saturday night) – for their support and the vice commodore, Kathryn Collins for organising the refreshments.  Well done to Ross on his first regatta as Hon Sailing Sec.

A special prize was presented by Sinead Leahy – the Brian Leahy Memorial Trophy – and her daughters Aisling, Emma and Rachel in memory of their father Brian, a fond laser sailor in our club for many years.  We also welcomed his parents Michael and Jean Leahy for the occasion.  This will be a perpetual prize for the best single handed (adult) boat in the SSC Regatta.  Thank you Sinead and congratulations to Darragh Kelleher on willing the inaugural race. 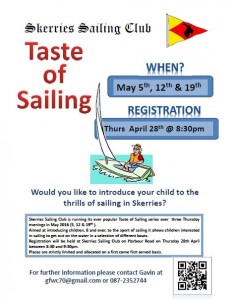 A great evening was had by all at the annual Cruisers Prize giving evening on Saturday February 27th last.

Of special note was the presentation of the Challenge cup in which Philip Jenkinson, grandson of the original 1927 presentor of the cup – Molly Joebges, re-presented the cup to Sean Davis, this years winner. 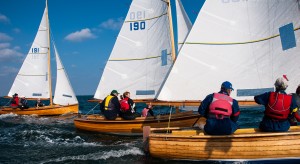 The Boat Owners meeting will be held in the club on Sunday March 20th at 12.45.

The Sound of Sikorsky – Paul Hick

A real life Helicopter Rescue experience. Hear about getting towed backwards in a force 11 and being lifted – “the top 2/3 of the spars flared about our heads!

Followed by Sailing Videos – the excitement of sailing – a series of videos on aspects of sailing – Martin O’Toole.

Did a 19 year German Girl sailor become an Honorary member of Skerries Sailing Club in 1950? 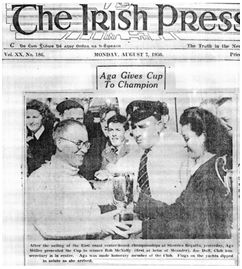 Hear the story of her epic sailing adventures in an 18 foot boat with her 63 year old father.

The sound of “La Marseillaise” rang around the club on Friday night Feb 12th at our now bi-annual international social event.

A great evening of music from the ever popular Genepool entertained our French visitors and many members.  Well done to Kathryn Collins for organising. And to Cliona Boylan and Kathryn for the food.  A great night – pitty about the match………

The provisional sailing events and fixture list for 2016 is now available.  Click on the link below.  All comments welcome.

This will be finalised at the boat owners meeting in late March 2016 (date to be confirmed).