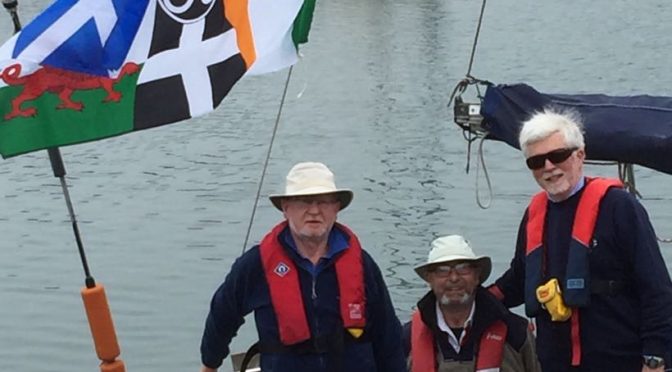 Blue Air sailed out of Skerries on Saturday 2nd of June with its crew wondering where on earth we would get to. The fact that the Isles of Scilly had been the intended destination for the previous eight months was no guarantee we would ever reach them, given the previous year’s frustrating experiences. In fact, one club member said, with tongue in cheek, that he would probably see us in Scotland!

Read the full story below!

On board Blue Air were Liam Dinneen, Eric Mason and Brian Lennon. Not far behind us was Helm’s Deep, Paul Harrison’s new boat with John Furlong and John Kenny as crew.

In Dun Laoire we dined in the Royal Irish Sailing Club at a very friendly event organised by the Moody Owners Association of Ireland. Great food and great company from all over Ireland.

Then it was on to Arklow.  Ah, yes, Arklow of the invisible floating rope that took a fancy to our prop! Fortunately Paul Harrison came to the rescue and in literally five seconds he had removed a huge mass of tangled nylon rope.

Arklow is also a pot mine-field. Of course, there are lots of people who rely on this mode of fishing for their livelihood but their pots should be marked clearly preferably with flags (as they do in Cornwall) and floating ropes should be outlawed completely.

On the main street, Christy’s Bar has become a necessary stop for us due to the excellent food and service.  Eric, Liam, Brian, Paul, John K. and John F. all met up for a great evening meal in preparation for the long voyage ahead.

In Arklow, Blue Air and Helm’s Deep joined with Tony Byrne’s legendary Meridian to sail south non-stop to the Isles of Scilly, an overnight passage of about 33 hours.

Tony’s crew consisted of Padraig A’Coistealbha and Brendan Dervan on board Meridian, the boat that Tony built himself.

The weather was kind, too kind, and we had to rely more on the engine than we wanted to.

On the long passage to the Isles of Scilly both dawn and dusk saw a small team of dolphins showing off their speed and jumping skills ahead of Blue Air. We ran a 2 hour watch scheme with an extra overlapping hour that helped relieve the loneliness of the night watches.

It was a decided advantage to arrive in the Isles of Scilly on Tuesday, three days after leaving the Isles of Skerries. To our total surprise, we had actually reached the intended destination and well on target. Visibility was down to about 100 metres when we got there but the passage through St. Mary’s Rodes is well marked. A reliable plotter combined with AIS are great boons in these low visibility situations.

Blue Air’s bilge keels are ideal for island hopping and we were able to tie up alongside the quay wall in Hugh Town. For those of you who are not familiar with the Isles of Scilly let me introduce you to one word, “Rattlers”. This is Cornwall’s and possibly the world’s greatest cider. ‘Nuff said. The three north Dublin boats and their crews ensured that adequate scientific sampling of the local brews was carried out.

Meridian headed on towards France but Helm’s Deep and Blue Air paid a visit to the magical Isle of St. Agnes (and the Turk’s Head).

From there Blue Air ventured to the uninhabited isle of Samson where we visited derelict cottages, once the homes of the two families that lived in this isolated place.

Next stop was the lush green isle of St. Martin’s. Blue Air anchored on the shallower southern shores while Helm’s Deep chose a deeper anchorage on the north, Bread and Cheese Bay. After a wild-goose chase around the island both crews met in Little Arthur’s Cafe for a scrumptious meal.

Next morning we parted ways, Helm’s Deep heading directly to Kilmore Quay and Blue Air going north east to St. Ives in Cornwall, St. Ives of the golden sands, a goodly portion of which is still on our decks.

To make good time for an entry through the sill at our next stop, Padstow, we needed to anchor just outside St. Ives’ harbour the night before leaving. That gave Liam a chance for an early morning swim in the remarkably transparent waters of Cornwall.

Padstow is Padstow, a delight in every sense. We were moored right in the heart of this town famous for its food and art.

Excellent marina facilities and friendly staff make this an ideal place to visit. Here we spent a day with Mike Harpur, the brain behind the excellent eOceanic.com. Having researched all Irish sailing havens and put them online (for free), Mike is now doing the same with the British Coast. He combined his visit to us with aerial photography of Padstow and other Cornish havens.

Mike treated us to a car trip as far south as St. Michael’s Mount and we ended the day in the scenic harbour at Porthleven. All in all we spent a leisurely two days in Padstow, a great place to relax.

Whatsapp groups were all warning of the impending arrival of storm Hector but we had already built that into our plans, intending to sit it out by spending a day in Dale in Milford Haven. It means a long trek across the Severn estuary and we did abandon extra plans to stop over in the isle of Lundy.

In Dale, inside Milford Haven, there are two pontoons, one floating in the middle of the bay and another that dries out on the beach.  Both are supplied and maintained by the local County Council.

We had a totally amazing meal in Dale Sailing Club, offering to kidnap the chef (who was quite willing to join us). On giving the Commodore our Skerries Sailing Club burgee, he very kindly reciprocated and the Dale burgee will soon be on display in our own club.

Storm Hector did his duty and howled across our bow all night causing the boat to waddle quite a bit and managed to break one of the bow lines.  A photo in Dale Sailing Club showed the backlash from storm Emily so we reckon Hector was not quite in the same league.

The day in Dale gave us a chance to stroll west to the other side of the St. Anne’s Head peninsula where we had wonderful views of the islands of Skokholm and Skomer.

Next leg was to cross the Irish Sea, from Dale to Arklow, a distance of 82 tedious nautical miles! This was Blue Air’s fourth time to make this trip. We always use the Tidal Stream charts but they have a strange omission. By leaving Dale (or Milford) at one hour before local high water, you encounter a strong north flowing tide off Skokholm up as far as the South Bishop. On this occasion we clocked up a steady 4 knots of tide for several hours. Amazingly, this strong inshore current is not shown on any Tidal atlas. It is worth knowing about, well worth knowing about!

In the wonderful Christy’s Bar in Arklow, we met up with south-bound sailors Jimmy Kelly and Noel Ruaric. Finally, on Saturday 16th (as planned) we sailed for home. We had a strong following wind that later veered to the West giving us a great sail on our final leg.

Highlights of this trip were: getting to so many different, beautiful and friendly places, meeting up with Mike Harpur, Liam’s amazing culinary skills and, above all, sailing in the company of good friends.