The History Of Skerries Sailing Club 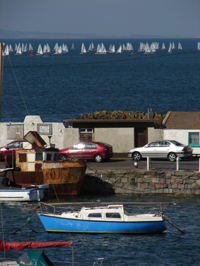 The first recorded regatta in Skerries took place in 1857 but it was another 76 years before a club was formally brought into being when a meeting in the local library gravely elected the first committee of Skerries Sailing Club.

J. McDermott was the first chairman, J. Varian was his deputy and N. Derham the hon. sec. Their surnames and the names of the other committee members read like a roll call of famous Skerries sailing names: Shiels, May, O’Reilly, McNally, Cochrane, Grimes, Clarke, and Dardis. Many of those names are still represented through their children and grandchildren who have taken up the call of sail and carry on a great local tradition.

The first fleet consisted of six boats and raced for prize money under a sweepstake. Each entrant paid in two shillings and sixpence (twelve and half pence in today’s money) and the winner took all.

The starter – today’s OOD – was Nicky Derham who also undertook the tricky task of handicapping the boats. The first trophy – The Tower Cup – was presented by Mr. Clifton of The Tower fame. It is still one of the club’s most treasured prizes and is presented annually for the winner of the Round the Islands Race. Shortly afterwards the club took the brave step of applying for membership of the Yacht Racing Association, the national sailing authority. Its successful application for membership was seconded by Clontarf Yacht and Boating Club and by Howth.

An idea of the practical nature of early yachting prizes can be gleaned from the records of the club’s first annual regatta, in 1934. First prize was a cup but second and third prizes were a pair of oars and an anchor and chain respectively.

For the first year or so of its existence, the fledgling club had no clubhouse and meetings were held and notices posted at the weigh-house at the end of the pier. This tiny building, now a sweet shop, is still standing. 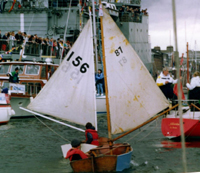 Another early item on the agenda was a club burgee and the committee plumped for the safe choice of a red and yellow design. This was to prove a controversial item in years to come but there was no sign of strife when Father Meehan solemnly blessed the first club flag which was then proudly hoisted at the flagpole at the old lifeboat house by Mr Dollard. The date was 13 June 1934.

That summer the fleet raced to a mark off Balbriggan for the new McGowan Cup and in September the club celebrated its first year in being by renting the old lifeboat house for a clubhouse. The rent was a daunting £20 a year. There was no bar and after meetings the members retired to local harbour hostelries for refreshments.

The first club dinner took place in October 1935 in the Grand Hotel at a cost of four shillings (20 pence) a head. Fund-raising dances were held in The Tower, Skerries’ ballroom of romance, sadly long demolished.

In 1936 club funds stood at £10 and 15 pence and some members adopted the Seagull Class and started a long local tradition of building their own boats. In those days buoyancy and lifejackets were unknown and some boats even shipped concrete blocks for both ballast and balance. 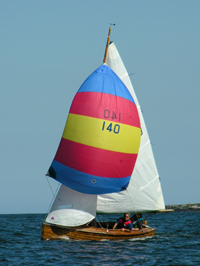 In 1939 yachts racing around the islands were startled to encounter seaplanes which had just landed. Two years later the first Mermaid dinghy, Minx, carrying sail number eight, appeared on the scene and impressed members by carrying off the East Coast Championship. Few realised it at the time but this new Irish class was to play a major role in club’s future.

The club’s first boatman was appointed at a wage of 35 pence a week and the minutes for that year also record the troubling news that races were being started and finished on different timepieces.

In 1944, despite the deprivations of wartime, the club bought its first permanent home, Stella Maris, which appropriately means Star of the Sea. It is now the Bayview Restaurant and cost the horrifying sum of £750 borrowed from the Northern Bank. J. Malone and J. Shiels were appointed trustees.

But the year was marred by tragedy. Members were shocked to learn of the death of the McConnell brothers when their yacht Carina foundered and was lost on a voyage to Clontarf in Dublin Bay.

Jim O’Leary was appointed club steward for the princely sum of £1.50 weekly. In 1946 a Miss Fletcher startled members by declaring she was taking up sailing. Their concern was prompted not by her sex but her age: she was 70. But the experiment, in Cessna, a boat build locally by Pat McNally, appears to have been successful.

The club moved premises in 1948 when Inish Rue and Bay View were bought by the club and Stella Maris was sold for £2500. 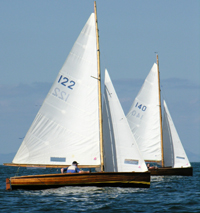 Soon more Mermaids were appearing on the scene. They were being built by J. Kearney for £140, fully fitted. A new class of National 18s, built by Hickey of Galway, cost £186 each and six were ordered for Skerries. In 1952 the club asked the Vocational Education Committee to run boat building classes and six Mermaids were built in the Bark Yard near the South Strand and launched the following year but buoyancy was not introduced until 1954.

The Cock of the North, a major National 18s events, was held at Skerries in 1956 and was won by a visitor from Twickenham. A Naval Corvette visited Skerries during the event.

But the club was to be shortly wracked by dissension over a move to add a goat’s head to the burgee. The reference stemmed from the legend of St Patrick’s goat, allegedly killed and eaten by locals. The proposal was carried.

In 1960 Paddy Hand was appointed Honorary Officer of the Day, a connection which lasted 34 years. He was an honorary life member at the time of his death in 1998.

By now junior membership was available and was stimulated by the Measle, a new starter boat designed by local man Brian Malone. The first junior committee was formed in 1966 and Skerries now boasts one of the largest Optimist fleets in Ireland. 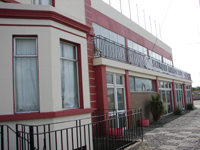 During the 1960s many inter club races were sailed between Skerries, Lough Swilly and Royal Munster Clubs and 1967 saw the advent of cruiser racing in Skerries. In 1970 the club was represented in the Fastnet Race. Since then Skerries members have represented Ireland in the Olympics, the Whitbread Race, and the BT Global challenge.

In 1968 the club moved to ban the tradition of the winners of cup races having to buy a drink for all present. A throwback to the days of much smaller membership, it was rapidly becoming a serious liability as sailing numbers swelled dramatically. The first Mermaid championship was held and this has become an event from which Skerries sailors regularly take home the silver, among them H. Grimes, J. Boylan, J. Dempsey Jnr, J Davies and F. Browne.

In 1972 Bord Failte made a loan towards the £34,500 cost of a new clubhouse and life membership was offered to make up part of the balance.

In 1977 the GP 14 Worlds were offered Skerries which it declined because it was felt the conditions were not acceptable at the time. Yet many other prestige events have been hosted at Skerries and in 1980 the GP14s were back for their National Championships. Ninety three boats entered. Apart from the GP 14 Worlds, the club in 1997 also hosted the Optimist National Championships.

by Paddy Monks (from notes by the late Joe Dardis)

The SSC Commodore’s Board – a brief history

The Commodore’s Board was commissioned in January 1976 by the then Commodore Joey Dardis who along with his fellow committee member Joe Boylan asked a local man and sailor, Brendan Redden to create a suitable board.  Brendan developed a unique hand carved mahogany surrounded board based on Celtic motifs with two birds on top facing a beautifully carved goats head.

The board took almost a year to complete and, on the 28 January 1977, was unveiled at a specially convened social event in the club (a cheese and wine evening, popular at the time).  Local papers attended and photos appeared in the Fingal Independent.  Brendan Redden also hand painted the Commodore’s names on the Board starting from 1933 to the then current one in 1977.  Brendan continued adding the subsequent Commodore’s names until the mid-80’s when he left for the UK.  The inscription job was then taken over for a few years by different people including, local artist Hugh Ryan, Gillian Dunne, and Dave West, among others.  The last Commodore on the original Board was Sam Shiels for his term 2012-2013.  The Board was then basically full as Brendan had used a Celtic anchor style icon for the years of additional service of each Commodore under their names, the longest reign was Joe Shiels from 1936 to 1943 with 7 such icons.  You can see this in the photo attached of the original Board above.

After a few years of the Board not being updated because of lack of space, in June 2018 the then Commodore Kathryn Collins gave the go ahead to get the Board re-scripted.  Committee member, Siobhan Boylan, arranged to have the Board photographed and removed.  The centre board was french polished and stained by David Lennon of Lennon & Sons and the dates and names re-scribed using gold leaf reapplied by hand using traditional skills by Peter McCullen.  The carved outer surround was unchanged but the resulting board you see today has plenty of room for many more commodores to come.  (Siobhan Boylan /Micheline Dardis – July 2019).