Conor O’Brien – the sailor who made the first circumnavigation.

Skerries Sailing Club (SSC) Winter talks have restarted! – When the kids are exhausted from their antics come and relax in SSC club house and listen to an interesting talk on Conor O’Brien, sailor extraordinaire to be given by Gerry Byrne.  Conor was born in 1880. An interesting time in Ireland. Ground breaking things were happening across a wide range of fronts, in science, the arts, the Gaelic language revival, agriculture, economics and independence politics. He was to dip his toe into most of them and fully immerse himself in others. But he’s best known as a sailor who made the first circumnavigation, aboard Saoirse, south of the Great Capes. More recently he’s back in the news with the restoration of his 1927 creation, the working sailboat Llen, which he designed and had built for the Falklands Island Company 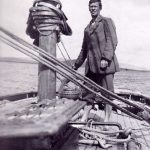 He witnessed the birth of a nation, experienced the death-throes of the wealthy upper class into which he was born and saw the resurrection of the peasant class which had once tugged forelocks to it. He served in two World Wars, and also, through his role in the Howth Gun Running, unwittingly helped spark a violent Irish insurrection.

This will be a popular talk, so please come early.  Club open at 8.00pm. Non Members Welcome