The theme of SSC’s entry in this year’s parade was ‘Come Sail with Us’.  We even had a new banner made by Image Depot especially for the parade which we will see on the balcony soon.  To highlight our theme we showcased two boats that are sailed frequently in the club, an Optimist representing the Junior members and a Mermaid for the Senior’s.

We had a great turnout from our Junior members who came down in their club hoodies and sailing gear with plenty of green on their heads and faces.  The floats were a colourful affair and they had plenty of fun waving and distributing the lollipops to the crowd.

The Optimist was towed by a Leaseplan Jeep to signify their sponsorship of the upcoming Leaseplan Optimist National & Open Championships 2015 which the club is hosting in Mid-August. We expect over 180 young optimist sailors, all under the age of 15 from Ireland, UK, Europe and other nationalities such as India and Bermuda. It is a prestigious event and we hope the club and the town of Skerries will benefit from this 5 daylong event and help us to welcome over 150 families to Skerries. It is a really exciting time for Junior sailing in Skerries and we are looking forward to a great summer on the water. 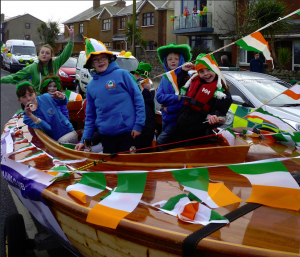 Sam Shiels very kindly provided his Mermaid ‘Azeezy’ to be part of the float and we packed the Juniors into this. I would like to thank Aidan Boylan for the use of his trailer, Sam Shiels for providing his very glossy mermaid,  George O’Connor (Snr & Jnr), Garrett Walsh, Tom Adams, Andrew Frazer, Tom Connell, Claire Arnold, Duncan O’Reilly, Stephen Crowley and of course to all the Junior members who came out in support of the club. A great day was had by all and we retired to the Club afterwards to continue the festivities.